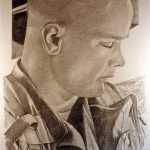 On April 10, 2011, Army Staff Sgt. Jamie Jarboe was shot in the neck by a sniper while on foot patrol in the Zhari district of Afghanistan. His unit had finished securing a southern Afghanistan village when he stood up to check for signs of danger and was shot. Paralyzed from the chest down, Jamie spent the next 11 months in multiple hospitals. During more than 115 surgeries he died 19 times on hospital operating tables before he took his last breath on March 21, 2012. Just days before he … END_OF_DOCUMENT_TOKEN_TO_BE_REPLACED