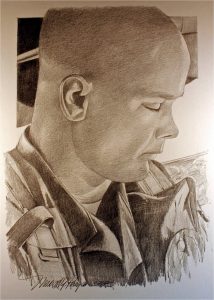 On April 10, 2011, Army Staff Sgt. Jamie Jarboe was shot in the neck by a sniper while on foot patrol in the Zhari district of Afghanistan. His unit had finished securing a southern Afghanistan village when he stood up to check for signs of danger and was shot.

Paralyzed from the chest down, Jamie spent the next 11 months in multiple hospitals. During more than 115 surgeries he died 19 times on hospital operating tables before he took his last breath on March 21, 2012.

Just days before he past away, he whispered his dying wish to his wife Melissa: Take care of my soldiers.

To carry on that wish, Melissa founded the Military Veteran Project, a nonprofit dedicated to funding research to find cures for Post-Traumatic Stress Disorder and Traumatic Brain Injury and to assist with suicide prevention for pre and post 9/11 veterans.

After witnessing firsthand how budget cuts, short staffed facilities and post-traumatic stress disorder took its toll on her hero and family, Melissa decided to take action. The Military Veteran Project has a vision to decrease military suicides – there are 22 a day on average, according to the Department of Veteran Affairs – with a goal to end military suicide as we know it through research.

As shocking as the 22 veteran suicides per day may be, the statistic may actually be higher, according to Melissa’s organization.

“Our overall goal is complete treatments through research study of 1,000 veterans to decrease military suicide,” says the organization’s website. “Veterans are fighting for freedoms on foreign soil but unable use that mere freedom when they return home, we know we can give them their freedom back.”

The Military Veteran Project is a volunteer led organization, which means your donation does not go to salaries or big fancy offices, it goes straight to the veteran in need, according to the organization.

Its mission is clear: “We are here to save lives and each day through donors and dedicated volunteers, we are able to do just that,” the website says. “Since being founded in 2012, the Military Veteran Project has been able to assist over 2,000 cases.”

For more information on how to donate to the Military Veteran Project, visit www.militaryveteranproject.org.